It is compulsory to have a guide for the manasulu circuit. This made Manaslu a totally unique experience. This trail offered some of the most beautiful scenery we’d encountered, but we found that locals, particularly lodge owner’s, were very reluctant to speak to us, and would immediately ask for our guide whenever we tried to ask something. People didn’t seem at all interested in even trying to understand our (admittedly awful) Nepali. We found this quite frustrating and a little sad, as it drove a solid barrier between us.

In Machhikhola we found a number of hotels, full of tourists. Here we would have a rest day whilst awaiting our guide, Bala, who was traveling from Kathmandu to meet us. When we arrived we gratefully chowed down a couple of bananas and scrubbed ourselves in the hot shower.

That afternoon we met a little girl who must have been 8 or 9 years old, a daughter of one of the owners, named Sumitar GURU! No matter how many times we attempted to pronounce ‘Guru’ we got a look of disdain, a head shake, and a ‘Sumitar GURU’! We never got it right, and I think she liked it that way. She was a little rascal, totally mischievous. We first met her when we were sitting in our bedroom relaxing and she was playing knock and run on the poor tourists taking a shower opposite our room. She later entered our bad books when she started playing knock and run on our bedroom door while we were taking an afternoon nap.

Excitement over fried chicken and beer for dinner:

Day 55 was our rest day. It was hot and humid. We went for a walk down to the river and to the local pool, a series of three concrete vats that had nasty green water in them. We quickly gave up any ideas of swimming. On our way back we passed three men covered in blood, butchering a huge buffalo which they’d just slaughtered. They were skinning the head and body, it was fascinating to watch.

Back to the hostel our guide Bala arrived. Bala was 47yrs old, he always wore a grin, was endlessly cheerful, and preferred to sing his sentences rather than simply say them. Bala had been a porter for many years and for the past seven years he’d been working as a guide. We quickly realised we’d landed ourselves an excellent guide in Bala – he always knew when to step in, and when give us space, which was important after walking independently for so long.

That afternoon we sat down with Bala, had an impromptu Nepali lesson (this became a daily occurrence), and planned our route – we would attempt to do the 10 day circuit in 7 days.

That night we went to bed early but couldn’t sleep due to the heat. Just as I was dozing off I was woken by someone outside our room with a torch, which lit up our room. The light suddenly got much brighter and I opened my eyes to see someone had reached in through our barred window, pulled back the blind, and was shining the torch right at my half naked body, which was starfished across the bed due to the heat. I jumped up and ran to the door to yell abuse at whoever it was. Outside our door was another figure wearing a headtorch: Sumitar GURU’s mum, who stood there giggling. Furious, I looked over to the left and saw the culprit: Sumitar, with a headtorch strapped on, looking over at me nonchalantly whilst pretending to be busy putting a lock on the room next door. What. A. Little. Monkey. I gave her a long and thorough scowl before returning to bed.

On day 56 we spent the morning walking along the river on a dirt road that was in the process of being extended along this valley to Tibet. It felt like we were walking through a construction site all morning – we passed many men, in thongs, wearing no ear plugs/muffs, with one foot on a jack hammer. At one point the trail led beneath a cliff, and on the edge of the cliff stood three men, jack hammering away at the very ground they stood on. Another few men went about shovelling the loose rocks off the cliff and onto the trail below. We waited a little then were waved on to say the coast was clear, despite the jack hammers continuing above. Three locals who’d also been waiting with us sprinted along the path under the cliff. This was the first time we’d seen a Nepali run, and we figured if the locals were scared of rockfall, we definitely should be. So we quickly followed suit and legged it along the trail under the cliff. A few days later we met a British lady who told us she’d met a tourist who’d been hit in the head by a rock whilst passing under this cliff – apparently he’d luckily been travelling with a nurse who had some steri-strips and was able to patch him up.

In the afternoon we passed potentially one of the world’s most dangerous work sites:

We watched as three men scampered about 80m up the side of these cliffs to continue carving a road out of the rock. They wore no harness, no hardhat, no nothing. It reminded us of a game of Lemmings.

On day 57 we hiked a further 7.5 hours up valley to Dyang, where I came painfully close to beating Ronnie at Chess, but alas failed yet again. 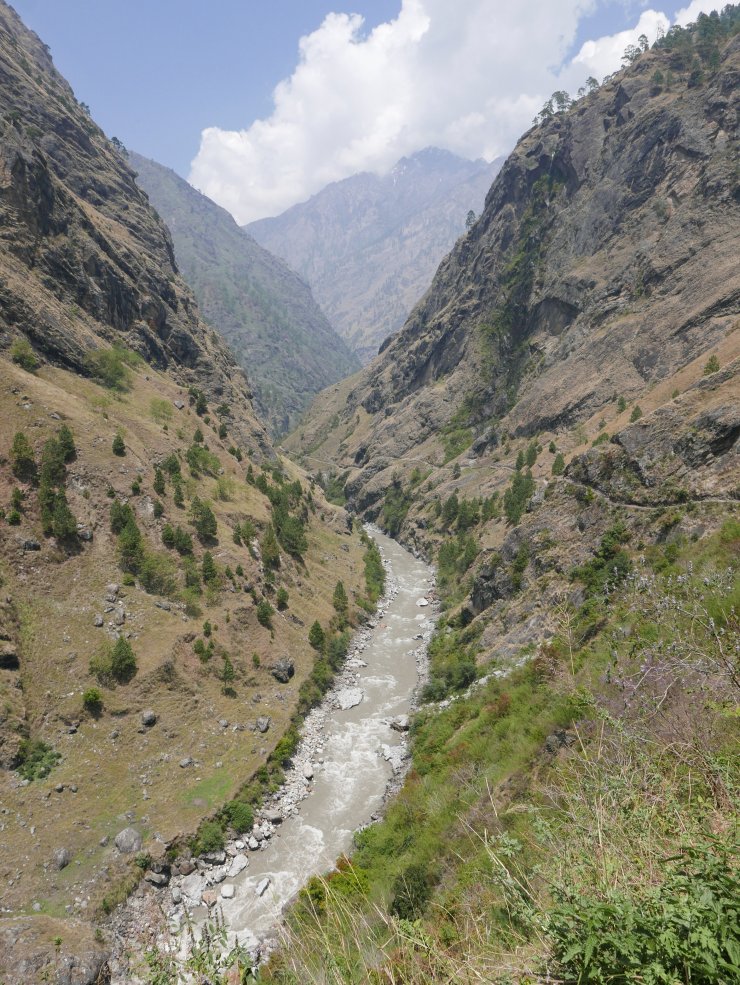 In Dyang we met a Brazilian who had a few days earlier accidentally knocked his pack off the side of the trail, and down an 800m cliff into the river below. Apparently a monk had come to his rescue – he scaled the cliff, and collected the bag from the river, which was so full of water that he had to dump the sleeping bag and some clothes so he could carry it.

On day 58 we walked along the river through a huge gorge which had little villages perched on cliffs either side. 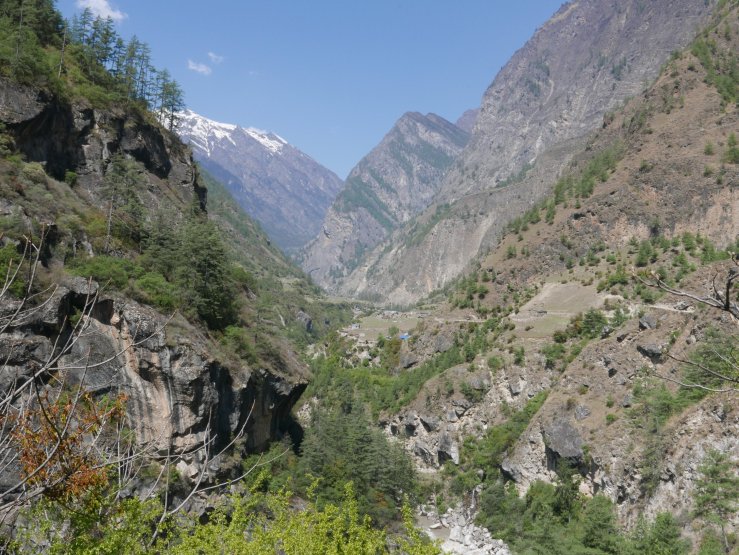 The heat and undulations were taking their toll; we were releived to reach Namrung after 5 hours. Today marked the half way mark for the whole trip which we celebrated with an unexpected steaming hot shower.

On day 59 we walked through beautiful stone villages to reach the village of Lho for lunch, which looked like something out of a fairytale. 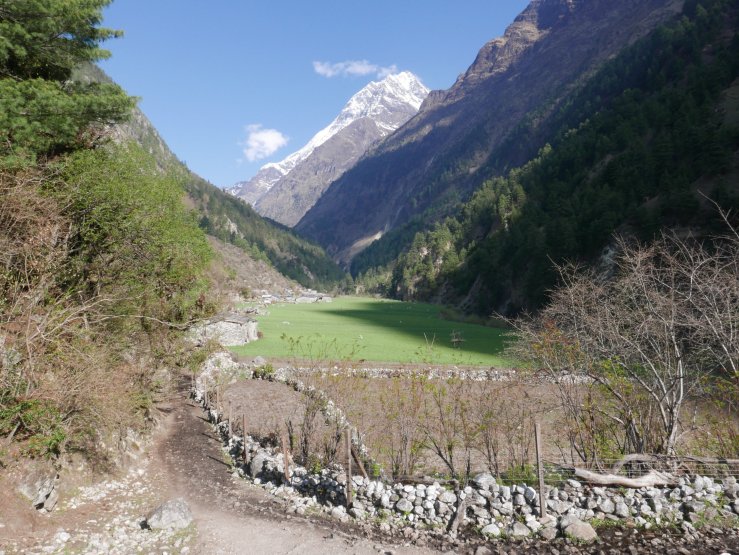 Lho in the background, it’s monastery perched on the hill:

We were still feeling totally exhausted, so stuffed ourselves to the brim with dal bhat to try to boost our energy. It seemed that the lack of protein in our diet was starting to take its toll.

In the evening in Samagaun we managed to secure a can of tuna to go with dinner, a welcome protein hit.

After an evening of thunder and lightning everything had a white coating of snow as we continued up the valley from Samagaun the next morning towards the Tibetan village of Samdo. 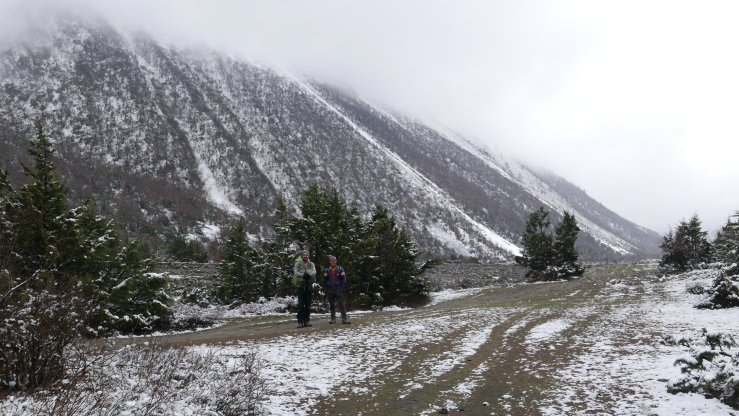 Samdo in the distance:

From Samdo we walked uphill with snow and hail battering our faces for a further two hours to reach Dharamsala (4400m). Despite the weather, the altitude, and our tired bodies, this climb was really enjoyable, and was made more exciting when we heard an almighty rumble and looked over to see a huge avalanche come down the other side of the valley.

In Dharamsala we were shown to our room: a thin metal portacabin which had a layer of wet muddy stones as a floor and one big ‘bed’ filling most of the room which consisted of a thin mat ontop of a sheet of plywood, ontop of some more wet stones. It felt like a fridge and smelt like a teenage boy’s bedroom, but was welcome shelter amidst the snow and hail. We had a quick peek in the rooms next door to see if we could do better and found that they all had their windows and doors wide open and the beds were totally covered in snow.

We went bed praying for good weather tomorrow when we’d attempt the Larke La pass. We didn’t want to get snowed in here.

The snowstorm continued overnight. Ronnie slept under the window and received a dusting of snow to his face halfway through the night.

On day 61 we were up at 4am. This was the highest altitude we’d slept at so far, and we both had headaches, lacked an appetite, and felt a bit sick. We force fed ourselves a small bowl of muesli for breakfast, which must’ve been housed somewhere near a fuel source as it tasted like it was laced with WD40. As we set off the weather was cloudy, but thankfully the snow had stopped. Two tour groups had left before us which was good news as they’d track out a trail through the snow.

The first section was almost flat through a snowy valley.

After about two hours we caught up to the front pack and started ahead, Bala leading the way and making a path. Frustratingly our water bladders had frozen after about half an hour of walking so we were both carrying 1.5kg of water which was of no use.

Although the trail markers followed only a gentle incline, tracking out a path was difficult work through the deep snow, and by this stage the altitude was taking its toll. Bala refused to let us go first, and so worked the hardest.

Looking back down the valley:

After a couple of hours all three of us were knackered. One of the tour groups was coming up quite close behind us, and Bala suggested to let them pass so they could track out the path and save us some energy. We gratefully obliged. 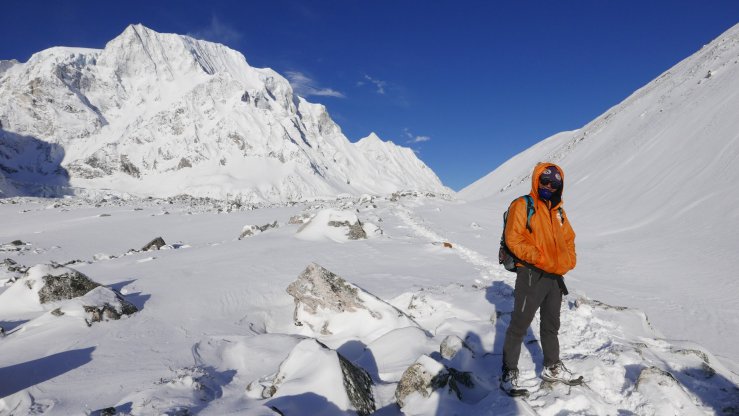 Following the others was much easier. They stopped a few times for a break and we loitered behind, waiting for them to go in front again. We finally reached the pass after about 4.5hours, feeling totally exhausted.

Down the other side we stumbled and fell through deep snow before sliding on our butts for a good few hundred metres.

We reached Bimtang at 1.30pm after 7hours walking. Bala later told us it was the longest he’d ever walked through snow. In Bimtang we found a little cottage room where we spent the afternoon napping.

On day 62 we awoke to clear skies and stunning views.

We hiked down the valley by the river for the whole day, Manaslu North directly ahead looking down on us with sheer faces so steep.

We eventually reached Dharapani, a little village by the river, where we had the unexpected pleasure of scrumptious popcorn chicken with our dal bhat dinner. Dharapani marked the end of Manaslu and the beginning of Annapurna, so we had an evening of beers to bid Bala goodbye. 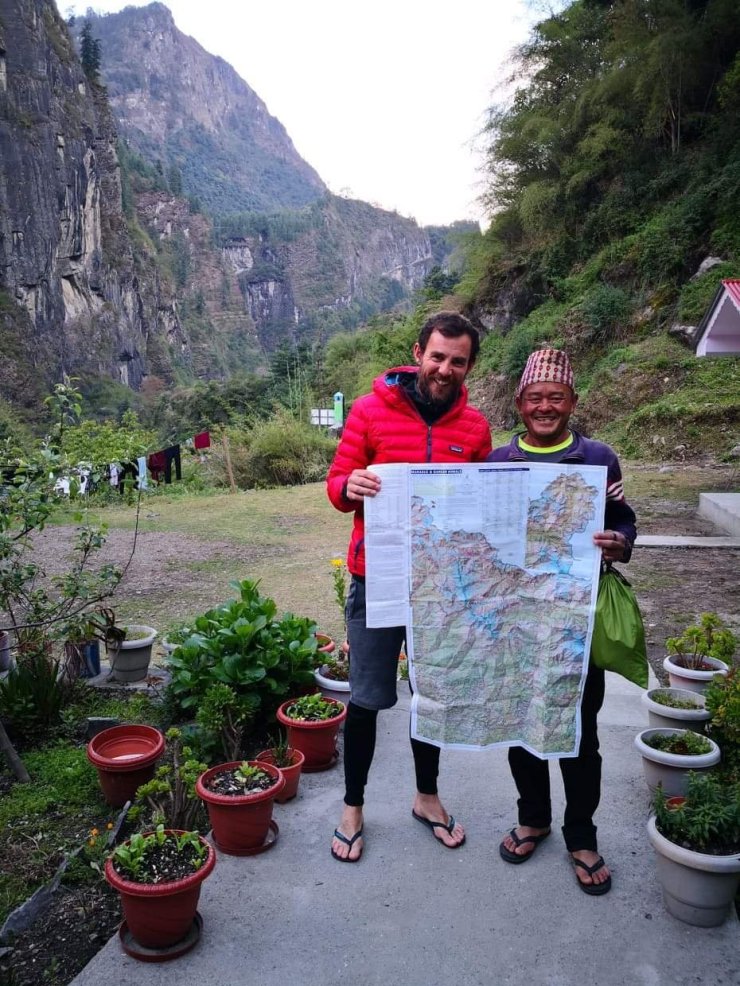 Please consider sponsoring us by donating to PHASE Nepal (www.phasenepal.org): an NGO that improves healthcare, education, and livelihood opportunities for disadvantaged populations in remote and resource-poor Himalayan mountain villages. Any donations can be made (with many thanks) via the following link: https://uk.virginmoneygiving.com/fundraiser-display/showROFundraiserPage?userUrl=AndrewWands&pageUrl=1