After a hectic last few days in Sydney scrambling to pack up our life into backpacks, we finally got ourselves on a plane to Kathmandu Nepal, absolutely spent.

We got our first glimpse of the Himalaya, snow capped in the distance, just before touching down; the sight of airplane wreckage next to the runway bringing on a nervous giggle. 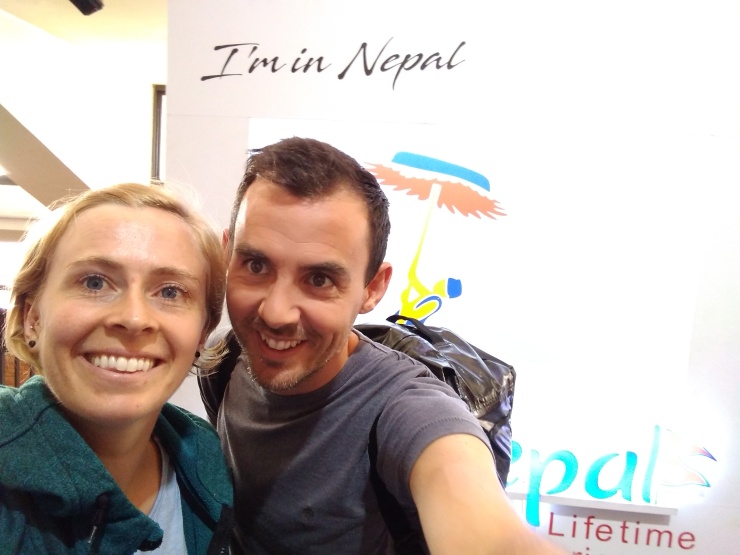 Our first few days in Kathmandu were spent gorging on indian curries, Nepali momos (dumplings), and wandering the dusty streets, diving out of way of motorbikes, trucks and cars. Ronnie recalling every shop and street corner we passed, apparently. We were lucky enough to spend our first two nights in a beautiful boutique hotel (thank you so much Junglefy), where Ronnie spent each morning eating a small Himalayan mountain worth of buffet breakfast, and the highlight of which involved watching star wars from the hot tub.

On day three we met with Robin Boulstead, who is responsible for originally developing the great Himalayan trail (GHT) by connecting existing trails to make a route encompassing the entire Himalaya, from East to West. Robin provided a heap of useful tips on logistical challenges, and also filled us in on what it takes to get on ‘the list’ – of those who have successfully completed the GHT. The criteria being that you must cross from border to border, with no sections skipped, and no vehicular assistance, otherwise you may only qualify to be placed on the ‘noteable efforts’ list 😲. If our competitive spirit hadn’t yet been ignited, it certainly was after this meeting.

In the following days we scurried around the streets of Kathmandu, buying supplies and arranging logistics and documents. Deepak from Adventure Mountain Club was incredibly helpful and knowledgeable in assisting us with finalising our route, and arranging our permits. After some discussion we were advised to avoid the Tashi Labasta pass due to the higher than normal snow fall this season, which would likely make it impassable. This was both a disappointment and a releif, as we had both been a nervous flap about using ice axes and crampons for the first time.

Despite all of this planning we still managed to get ropped into having tea with our hotel’s travel agent, who was lovely yet highly disappointed to learn we already had planned and arranged our trek. Unpeturbed, he spent the next 45minutes attempting to convince us that after 4 months in the mountains we would probably like nothing more than to back up with a further 10 day trek with his company. Another half hour of smiling and nodding later, and we finally wriggled free.

Other highlights of the last few days include:

– Attempting to print documents at a local copy shop, which involved logging into Ronnie’s email account using a keyboard that was so clogged with dust that every second key registered twice. Combined with a hidden password field, this was an almost impossible task. After half and hour of admirable persistence, he was in, cheering.

– Realising after we’d moved in that our hotel room was caked in a thick layer of dust as the balcony door had been left open. Ronnie couldn’t stop sneezing. After trying to explain this to the hotel manager we tried to ask for some clean sheets – to which he looked absolutely horrified, then a moment later overjoyed. He then hurried to the laundry and gave us one clean pillow case. To which we pretended to be overjoyed, and shyly asked for another. To which he again looked horrified and then a moment later, overjoyed. This cycle repeated until we eventually ended up with a clean under sheet and pillow cases, and resolved to just turn the doona covers inside out rather than continue.

Six days later and we have commenced the journey to the eastern border to start walking. This includes a 15hr overnight bus (which we are currently on and so far has been maintaining an average speed slightly slower than walking pace); an 8hr jeep ride; and another jeep ride to a town which is a day’s walk from the border. In total, about 4days worth of misery. On the positive side we have a healthy supply of samosas and onion bhajis at the ready. Wish us luck 😜

Please consider sponsoring us by donating to PHASE Nepal: an NGO that improves healthcare, education, and livelihood opportunities for disadvantaged populations in remote and resource-poor Himalayan mountain villages. Any donations can be made (with many thanks) via the following link: https://uk.virginmoneygiving.com/fundraiser-display/showROFundraiserPage?userUrl=AndrewWands&pageUrl=1

One Reply to “The beginning”